The moral ethic behind and driving Dada may be described as Foolery, as a Game, as a need to Draw Attention to, as a forum for Social Criticism, but mostly the responsibility of artists to point out the absolute Idiotic Lunacy of the time!  Political, Spiritual, Social, and what were once thought to be Wise leaders, led the nations of the Western World to the precipice and convinced them to step or fall into the cataclysm.  A small group of outraged, angry and apoplectic artists responded to the lunacy of the First World War by unleashing their vitriol in a variety of works of creativity.  These creative responses were loud, pulsating streams of energy which were meant to disturb and disrupt the audience.  Some audience members laughed at the presence of foolery but, for the artists behind the masks of indignation, the responses were serious.

What are your thoughts on the Dada Movement and does the sense of betrayal felt in the second decade of the 20th century still resonate today?  Is the Dada aesthetic relevant in 2017? 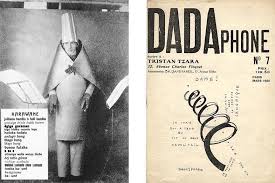 27 thoughts on “Dada—Foolery, a Game, Draw Attention to, Social Criticism, the Idiotic!”

Academic professor at the University of Nevada Las Vegas. I teach theory courses in Art and Architecture History. In addition, I also curate exhibitions on campus as well as in other venues nationally and internationally.